The Discovery of Mauritius Island

When can the discovery of Mauritius Island by humans for the first time be exactly traced back?

This question only gives rise to speculations. There are no historical records about the island’s discovery prior to the arrival of the Portuguese.

Historians theorise about the accidental sighting of, and landing on Mauritius by ancient people – the Semitic People, the Phoenicians, the Persians, the Egyptians, the Indians or even the Chineses.

It is known that these navigators sailed to Eastern Africa and in some cases to Southern Africa, Comoros Islands and Madagascar. While sailing the Indian Ocean, it might have been possible that they discovered the Mascarene Islands of Mauritius and Reunion.

In the Alberto Cantino’s map of 1502 the Arab name of Mauritius Island appeared as Dina Arobi - Abandoned Island.

Historians claim that the Arabs communicated this name to the Portuguese, and based on this fact they concluded that the former had already discovered Mauritius by that time.

It is common knowledge that the Arabs explored and settled on the eastern coast of Africa and in the Comoros Islands more than one thousand years ago.

They called Africa the Country of Zanj.

Arab sailors also ventured further into the Indian Ocean which they called the Sea of Zanj.

Mauritian historian A. North-Coombes writes that Vasco da Gama and his companions were the first Europeans who came to know about the existence of the Mascarene Islands in 1498.

An Indian pilot from Gujarat, whom he recruited in Malindi – Mozambique, for his voyage to Calicut - India, showed him his maps with precious information about the Indian Ocean.

A. North-Coombes further asserts that the Portuguese were the first Europeans who discovered and explored Mauritius.

He attributes the discovery of Mauritius, in July 1500, to the Portuguese navigator Diego Dias.

Dr. F. Bandeira Ferreira, a Portuguese historian also supports this belief. He purported that Diego Dias was driven off his course, by a violent tempest, during his voyage to the Far East. His new course led him to the shore of Mauritius.

The Portuguese named the island Cirne - probably because they found it was shaped like a swan.

Neither the Portuguese nor the Arabs settled here. The reason why they did not inhabit the island, which had no indigenous population, is probably because they did not find any riches – precious stones and metals, spices and silk for trading. 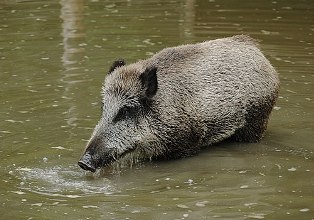 The Portuguese left no trace of their passage in Mauritius; except that it is believed the wild boar - Sus scrofa, (or “cochons marrons” in Mauritian tongue), found in the forests of Mauritius descend from domestic pigs left by them.

After the Portuguese, the Dutch discovered and colonised the island followed by the French.

Subsequently the British launched an attack against the French colonists and eventually took possession of Mauritius.