The Mauritius Cuckooshrike is a small endemic arboreal passerine and lives mostly on the canopy of the upland forests of Mauritius.

Due to its small range and population, the species is classified Vulnerable on the IUCN Red List. Habitat loss and exotic mammalian predators are the main reasons behind the decrease in its population size.

To a lesser extent, the spraying of organochlorine pesticide (DDT) in the 1950s and 1960s to control malaria also caused a rarefaction of the birds.

Conservation efforts to rehabilitate native ecosystems are well under way and there are evidences that the cuckooshrike is responding positively to this environment.

Any substantial increase in the range and population size of the species may eventually lead to its status being downlisted to Near Threatened by the IUCN. 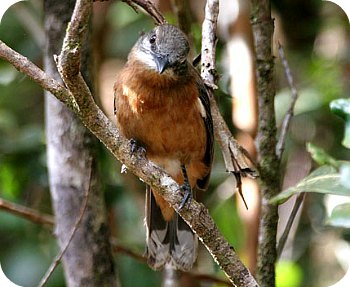 Vulnerable and may eventually be downlisted to Near Threatened (NT)

International Union for the Conservation of Nature - Vulnerable (VU)

Inhabits the canopy of the tropical forests of Black River Gorges, Bel Ombre, Combo and Macchabée as well as adjacent areas of degraded forests.

Conservationists' anecdotal evidences support that its distribution within forest are linked to food availability.

Habitat loss and degradation caused by the introduction of exotic plants and poor regeneration of native plants.

Feral cats and introduced mammalian predators such as rats, monkeys and mongoose.

To a lesser extent, the destruction of nests, eggs and chicks by tropical cyclones.

The species is responding well to rehabilitation of native ecosystems in Conservation Management Areas, which has included exclusion of introduced animals and replacement of exotic plants with native species. 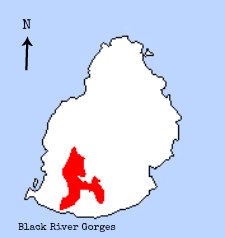