The population of the Mauritius Fody suffered a rapid decline in the 1970s due to nest predation and habitat loss.

Conservationists believe that between 1975 and 1993 the foudia ruba suffered a loss of 55 percent both in terms of population size and area of occupancy.

In 1994 its status on the IUCN Red List was categorised as Critically Endangered.

Now due to massive conservation efforts its population is stable and its status downlisted to Endangered.

The endemic Fody bears a close resemblance to the exotic Madagascar Fody which is very common in Mauritius.. The male Madagascar Fody, however, has completely bright red plumage during breeding season. 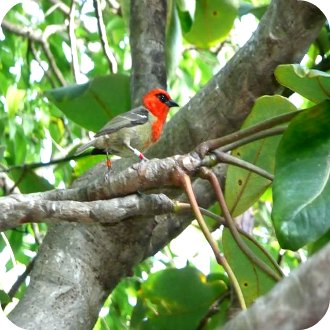 International Union for the Conservation of Nature - Endangered

Male: brown with a red plumage from head and breast with black loreal area

Birds like the Indian Mynah have also been observed predating nests

Habitat  degradation and loss caused by the clearance of upland forest, particularly for plantations in the 1970s

A captive-rearing programme is implemented by the Mauritian Wildlife Foundation, the Gerald Durrell Endemic Wildlife Sanctuary and the National Parks and Conservation Service. 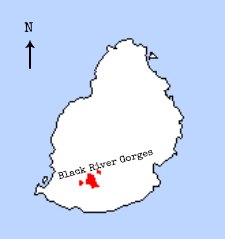