In 1986 the pink pigeon was on the brink of extinction. Only twelve remained; a dramatic drop from the single population of twenty individuals which existed in the wild around the mid-1970s.

Destruction of native forest for sugar cane cultivation, non-native predators like rats, mongooses and monkeys and the degradation of the natural habitat were the main causes leading to the alarming decline in the pigeons’ population.

Had intensive conservation programme not been initiated with the introduction of captive breeding in 1976, the endemic pigeon to Mauritius would have been totally wiped out. 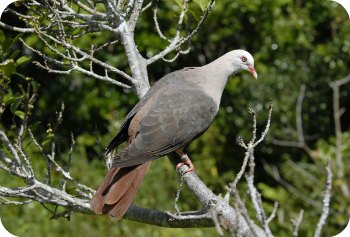 International Union for the Conservation of Nature - Endangered (EN)

A distinctive medium-sized pigeon with a pale pink plumage, pink feet and beak. They have brown wings and a broad rusty-brown tail.

Their eyes are dark brown, surrounded by a ring of red skin.

Another populaion is thriving on the predator-free island and nature reserve of Ile aux Aigrettes, off the coast of southeast Mauritius.

Flowers, leaves and fruits of native and exotic trees

Predators such as rats, mongooses, monkeys and feral cats

Invasive plant species such as the Chinese Guava Psidium cattleianum and the privet Ligustrum robustum var. walkeri reduce the quality of breeding and foraging habitat.

Habitat  degradation and loss caused by the destruction of native forest, particularly for plantations.

Destruction of nests, eggs, chicks and habitat  by tropical cyclones

A captive-breeding and reintroduction programme by the Mauritian Wildlife Foundation

Supplementary feeding due to a pronounced degradation of natural habitat. The herbivores cannot find sufficient food for their survival.